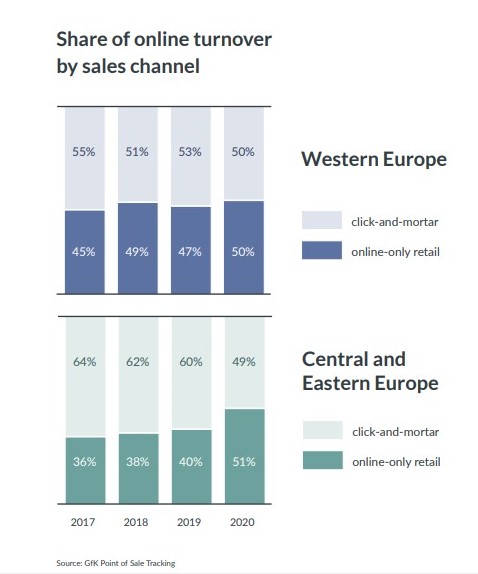 «Working at home, learning at home, eating at home and having entertainment at home – activities that usually required leaving the house largely took place within our own walls. – commented Filip Vojtech, Retail, Fashion & Lifestyle, Geomarketing, GfK -. This forced shift created challenges for many virtually overnight; however, these challenges could be solved or at least mitigated using technical consumer goods. Therefore, there was high demand for screens and computers, for all kinds of kitchen appliances — including dishwashers and refrigerators – but also for robot vacuum cleaners, gaming equipment, and TVs». This is what emerges about retail of technical consumer goods from GfK study: “European retail in 2020 and 2021”.

Moreover, according the the study 40% of turnover of consumer tech goods were made through on-line channel in 2020, both in Western as well as Central and Eastern Europe, as data from GfK’s Point of Sale Tracking shows. However, there are still major differences between individual markets. In the United Kingdom, 61% of consumer tech goods were purchased on-line last year, whilw in Italy and Portugal, the figures were only 23% and 17%, respectively, but the increase in turnover compared to 2019 was significant (54% and 114%, respectively).

Anyway, GfK underlined thay, «in Europe in 2020 the biggest winners were click-and-mortar retailers which increased their online turnover by 60%, much more than on-line-only retailers (36%), and now account for over 50% of all on-line sales for the first time. Growth was particularly pronounced in the Central and Eastern European countries, where their share jumped by 11 percentage points».