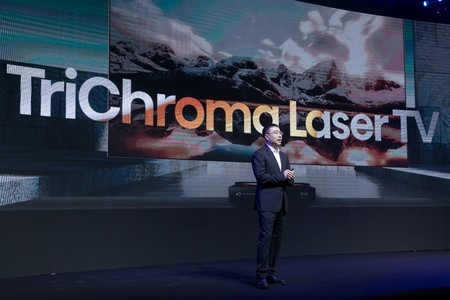 Hisense presented its new range of TriChroma Laser TV, characterized by a state-of-the-art display technology, that will be applied to multiple devices. This is a new laser technology adopting RGB laser light source to achieve wider color gamut. Hisense announced this cutting-edge display technology with a transformative product line of laser TV. Liu Xianrong, the Chief Scientist of Hisense Laser Display explained in a keynote address that the technology is packaging and controlling separate lasers to get purer colors for display. A 128% improvement is achieved in the original RGB color. TriChroma also attains 20% brightness enhancement at the pixel-level with a 430-nit picture brightness, exceeding that of a regular TV.
Empowered with TriChroma laser technology, new TV product lines include various screen sizes, from 75-inch to 100-inch giant screen with elimination of ambient lighting. Since the color gamut coverage reaches up to 151% of the DCI-P3 film color standard, it is almost 50% beyond high-end cinema. «Screens are vitally important in the reconstruction of our lifestyle due to their unique value and function… – said Fisher Yu, the President of Hisense Visual Technology – Services, social experiences, people. The screen will connect them all.»