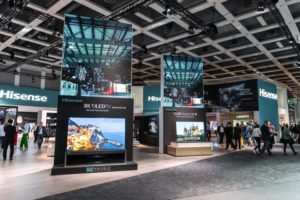 Hisense announced the intention of produce TV sets in Gorenje factory in Velenje starting in January 2021.
The management of Hisense Group has confirmed the decision to establish this new TV set factory within the production site of Hisense Gorenje, in one of the existing production halls.
The factory line will be established by the end of this year, and production will start in January2021.
On average, the factory will employ 350 people, in the first year it will produce 1.5 million TV sets, and in the following phases up to 4 million TV sets per year.
Gorenje, d. o. o., employees, included in the redundancy program, will have the opportunity to obtain with quality and responsible work during their notice period, a letter of recommendation as a strong entry ticket for later employment in the new factory, should they be interested in this new new kind of work. The selection of employees in the new factory will be made by the owner, but among the two candidates with the same competencies, the one with a letter of recommendation from Gorenje will have priority. In the new factory, employees will manufacture TV sets under the Hisense brand, intended for the European market.

Boost to employment and production for Hisense