“Consumers will likely not come back until they think it is safe to do so, both physically and financially”. This is what reveals the biweekly consumer surveys of Deloitte, that measures their anxiety, asking them about the perceived safety-specific activities, and tracking where they intend to spend their money. According to the survey results, more consumers are feeling safe going to the store, staying in a hotel, and taking a flight.
“Since mid-April, economies around the world are in various stages of reopening. While consumers continue to face the dual-front crisis of personal safety and financial well-being, there are initial positive signs.” – Deloitte experts explain. 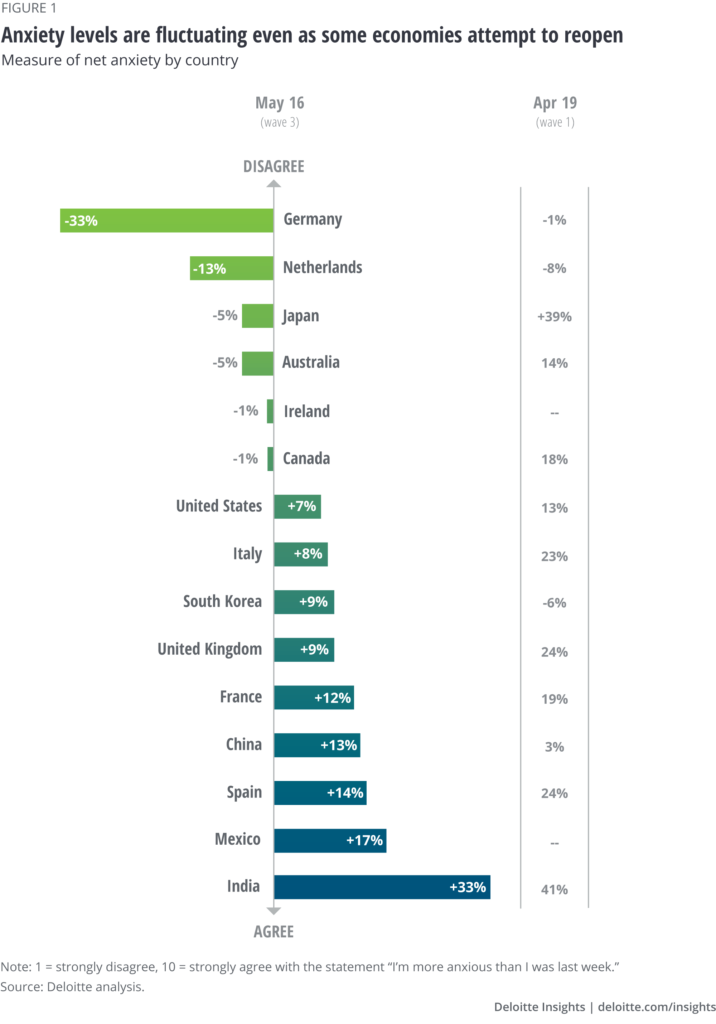 Of course, concerns and anxiety change in any country, according to the situation.
India, for example, which saw COVID-19 hit later than others, continue to show higher levels of anxiety while countries that were affected by COVID-19 relatively early on and now have relaxed stay-at-home orders more widely have seen anxiety lessen. Japan, instead, opened up aspects of its economy on May 14, and in a sign that other countries looking to follow suit will find encouraging, its net anxiety dropped to -5% from +20% in the previous Deloitte survey. That said, consumers seem attuned to the forward progress and backward steps in this public health crisis—net anxiety in South Korea went up (19% to +9%) following a recent new COVID-19 cluster outbreak in Seoul.
“Personal health concerns – Deloitte specifies – have dropped in seven out of the 13 original countries in our survey, while concerns around the health of others have dropped in 11. In China, Mexico, India, and Spain, health concerns remain the highest. In China, Mexico, and India financial concerns are more or less on par with health concerns. Western Europe, the rest of North America, Australia, South Korea, and Japan appear to share similar levels of health concerns with some differing levels of financial concerns; Italy reports higher and South Korea and Japan lower financial concerns than the other countries in this group. On average, across all the countries we surveyed, 40% of respondents who still had a job were concerned about losing their jobs (figure 3). That is only slightly lower than mid-April (42%), led by respondents in Mexico (65%), Spain (59%), India (53%), and South Korea (50%). As the unemployment rate in China rises,1 concern over losing a job has risen from 36% in mid-April to 43% in mid-May as have concerns over making upcoming payments, 38% to 48%. Respondents in Mexico and India are also the most concerned about making upcoming payments. And respondents in India (63%) and China (61%) are the most likely to be delaying large purchases. Meanwhile, respondents in Germany and France feel the most secure in their employment status. Financial concerns have also lessened somewhat in Germany and the United Kingdom. The mixed responses underscore the national nature of the dual-front crisis.”