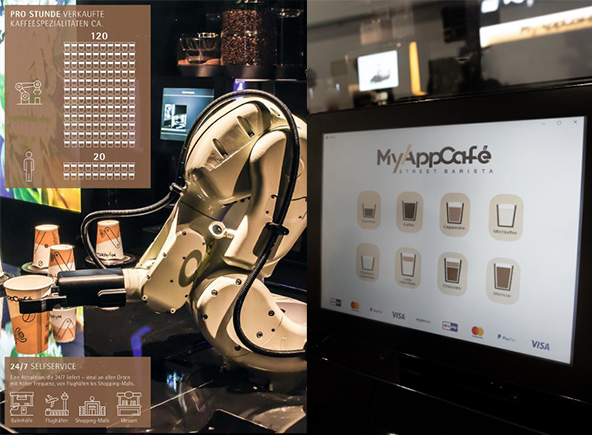 MyAppCafé is a start-up that is studying and developing new technologiacal systems for the robotization of coffee-machines. Based in Germany, it signed a partnership with WMF, one of the GroupeSEB’ companies.
The start-up MyAppCafé is a project that was launched in just 12 months. Following some initial prototypes, serial production of the almost seven square metre MyAppCafé boxes is now underway. In addition to digitalisation, the company is also focusing on the use of fair-trade organic coffee and takeaway cups that are completely compostable. The coffee is ordered via a touch display and cashless payments are made using PayPal or Apple Pay. With the MyAppCafé app, it is also possible to order and pay for coffee directly from the smartphone. The code sent is then read on site and the consumer receives a freshly prepared coffee in a hygienically safe way from the robot barista. Additional entertainment value is provided by a food printer that can print photo motifs on the milk foam.
WMF takes part in this innovative project with its machines, since two WMF 9000 S+ models are installed in each MyAppCafé bar. In addition to the WMF CoffeeConnect digital solution, the brand also developed a bespoke milk system especially for the customer, which enables at least 650 speciality coffees to be prepared without needing to be refilled. The concept is being marketed worldwide as a franchise system. The first MyAppCafé was set up at Europaplatz in Karlsruhe at the beginning of August. More are due to follow in Böblingen and Heilbronn in the near future.