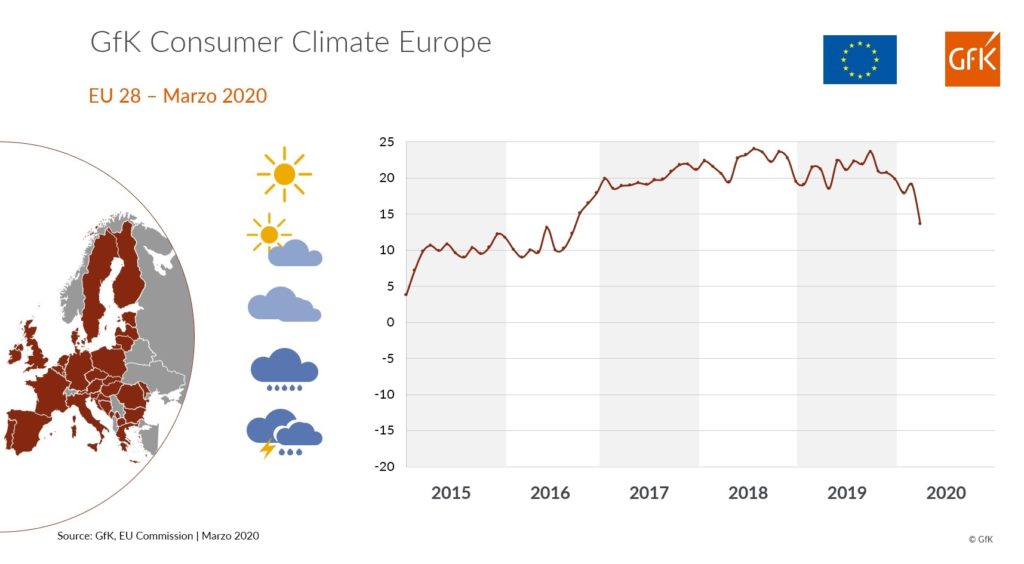 Coronavirus emergency is having a huge impact on European consumer sentiment. It is GfK that affirms this, after its survey showing that Italy and France are the countries that record the most marked drop in the confidence index. Economic expectations and the propensity to buy worsen everywhere is visible in March. Income expectations also fell.
The European consumer confidence index, measured by GfK in 28 states of the European Union, settled at 13.6 points in March 2020, with a decidedly negative trend compared to the previous month. This is the lowest level recorded since 2016.
GfK survey was carried out in the first two weeks of March, when the spread of the infection still concerned only some countries and the measures had not yet been introduced in a capillary manner containment.
“Today Europe – GfK experts explain – is facing the threat of one of the heaviest recessions in recent history. It is therefore not surprising that the economic expectations of European consumers recorded a significant drop in March 2020 (-20 points). The most negative countries are those where Coronavirus spread first and recorded the biggest losses, such as Italy (-43 points) and France (-29 points). The only signs of optimism come from some Eastern European countries (Poland, Slovakia and Hungary) where the contagion was still low at the beginning of March.

Concerns about the future of the European economy are leading to a significant decrease in income expectations. The overall indicator for the 28 EU countries settles at +5 points in March, with a decrease of 9 points compared to the previous month. The biggest losses are recorded in Greece (-22 points) and in Italy (-18 points). In the first half of March, GfK recorded positive income expectations in some Central and Eastern European countries even less affected by the effects of Covid-19.
Like other economic indicators, the propensity to buy of European consumers is also falling sharply: -13 points in March. Croatia (-27 points), Italy and Austria (-24 points each) are the countries that have experienced the most significant slowdown.