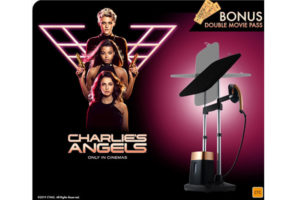 Following the success of the IXEO-Men in Black operation, Tefal is renewing its partnership with SONY Pictures in Australia for the launch of the most recent Charlie’s Angels movie.
According to the Groupe SEB, owner of Tefal brand, the latest blockbuster from Sony studios — which will be released at the end of December in Australia — is the ideal opportunity to show IXEO power on the big screen.
After an initial successful campaign for the release of Men in Black International — the video had more than 420,000 views in Australia, with more than 200 in-store activations — SONY is renewing its trust in the brand by providing the rights to associate the film with IXEO Power.
This new on- and off-line campaign that began at the end of November (and goes until the beginning of January) is a great way to boost Tefal’s visibility and growth in Australia. It will also feature a Facebook contest on the theme “Share your worst ironing experience” with a chance to win Sony wireless headphones. As a bonus, consumers who buy the IXEO will receive 2 tickets to see the movie in theaters.