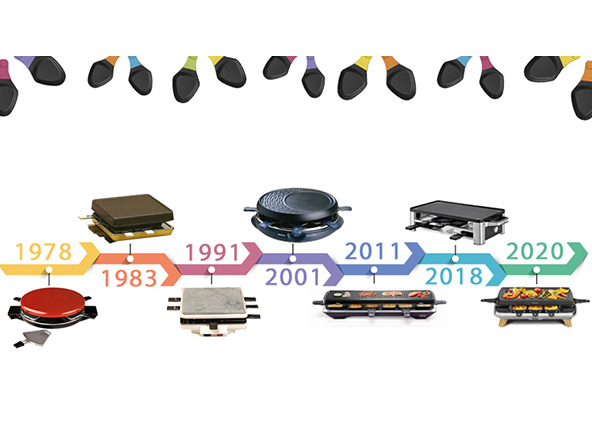 Raclette sets have a long history and Tefal and other Groupe SEB’s brands are among the protagonists of the launch and development of this product, now available in a modern version.
In the middle of the seventies, Tefal decided to make Raclette de Savoie available to everyone and invented a new way of communal eating: food is prepared directly on the table and the emphasis is on sharing. In 1978, the first round raclette set with 6 non-stick pans was launched. Product innovations came thick and fast to keep cheese lovers happy. There was a “me and you” model for two people in 1982 and a dual-function model first with a grill in 1983 then with a hot cooking stone in 1991. 2001 saw the arrival of a new generation of compact models for raclette “on the go”. New appliances joined the range with the acquisition of Moulinex that same year and, in 2002, a raclette set was released with ten pans. A space-saving feature – integrated cord storage – was added in 2007 and in 2011, discerning raclette fans were able to buy table “centerpiece” models using authentic materials such as wood, glass and stone. Later additions to the Group – OBH Nordica (2015) and WMF (2016) – opened up new markets.  In more recent years, the focus has been on Premium products such as the acclaimed WMF Lono raclette/grill ranked number one by the Stiftung Warentest consumer association in Germany.
At the end of this year, Tefal will be launching a “Gourmet” high-end raclette set with three functions (raclette, grill and plancha) and deeper pans giving users a chance share creative meals all year long.