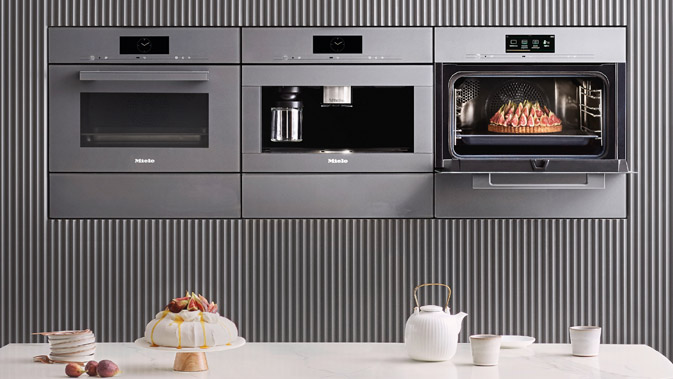 Prestigious recognitions have been assigned to Miele Appliances for the sophisticated design of its products. Since the beginning of the year, the company has obtained 14 prestigious awards, such as seven iF product design awards and seven ‘Red Dot Award: Product Design 2019’. Five awards refer to the new Generation 7000 built-in appliances alone, which are due for launch in May.
The jury ascribes high-quality design to Miele’s ArtLine and VitroLine kitchen appliances. ArtLine consistently relies on handleless units and is the first choice for open-plan, puristic kitchens. VitroLine is defined by its glass fronts with solid metal handles with a smoothly finished glass insert in the colour of the machine. Both design lines are available in graphite grey, brilliant white and obsidian black, and have already received the Red Dot Award alongside the iF Product Design Award. The CVA 7845 coffee machine, instead, is a member of the new 7000 generation.It has three beans containers, cleans its pipework and descales automatically, and adjusts the coffee spout automatically to the height of the cup, mug or glass. The CVA 7845 had previously already won over the iF jury and is therefore a double prize winner. The same applies to the new MasterCool series of refrigeration products which are due to be launched in Europe this autumn. ‘Degree of innovation, durability, functionality and environmental compatibility’ are criteria according to which the Red Dot jury selects its awardees. Miele dishwashers from the 7000 series meet all these expectations. Consequently the Red Dot Product Design Award 2019 was presented to fully integrated and integrated dishwashers with AutoDos and PowerDisk. And once again, Miele appliances are multi-awarded as the G 7915 SCi holds also the iF Award and the G 7965 SCVi even has received the iF Gold Award.

Four iF Products Design for Miele domestic and commercial products

Six iF Design Awards for Whirlpool and its brands