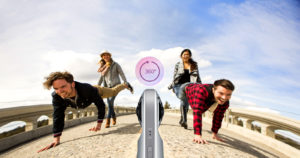 Lg Electronics has recently updated its 360 CAM with a new software that, in addition to the 360-degree visuals also provides the respective audio format called Spatial Audio. Being equipped with three mics, this model is one of very few 360-degree cameras providing horizontal surround sound experience. Moreover, with the addition of the software update, the sound experience goes even one step further to immersive 3D. This is Spatial Audio which means the sound changes depending upon which direction you turn. The LG 360 CAM also supports both YouTube Spatial Audio and 360-degree video in a single camera solution.

A fil rouge between outdoor and indoor

Not only in the garden