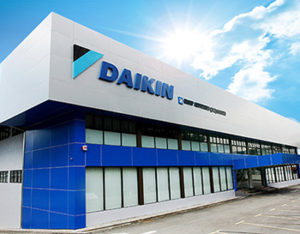 Daikin Industries will invest approximately 10 billion yen in the Thang Long Industrial Park II located in the suburbs of the capital of Hanoi in the Socialist Republic of Vietnam. This will be the first production base in the country. With operations scheduled to start from April 2018, the factory is slated to manufacture residential-use air conditioners and join existing Daikin production bases in Thailand, Malaysia, and India as the newest factory in Asia. Daikin is expanding its sales network and bolstering its after sales service system in this interesting area, where sales are steadily growing in such countries as Vietnam, Indonesia, and Thailand. In recent years, active infrastructure investment and the advance of overseas companies have sustained economic growth in Asia, that is also characterized by increases in population and higher income levels. This positive context has also led to expansion of the air conditioning market. With production bases established in Thailand, Malaysia, and India, Daikin currently provides products to each country in the Asia region. Demand for air conditioners in Vietnam has experienced rapid growth centering particularly on residential-use air conditioners due to the country’s remarkable economic development and expanding middle class.