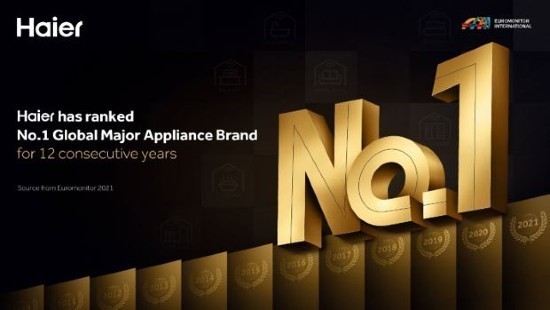 According to Euromonitor International annual ranking, Haier Smart Home is the world’s number one brand of major household appliances. This is the 12th consecutive year that the company reaches the top of the global ranking of major appliances with its Haier brand, as well as ranking as the number one among the domestic appliance manufacturers.
Euromonitor International is an important provider of business intelligence and consumer research services, ranking manufacturers according to retail sales value. In addition to being ranked as the absolute number one in Major Appliances in 2020, Haier has ranked number one for the thirteenth consecutive year in refrigerator sales and for the twelfth consecutive year in the washing segment, as well as confirming its leadership for ten years running in the freezer segment and for eleven years running in wine cellars.«A success – the company explains in a press release – that starts with a clear and defined mission: over the years, Haier Smart Home has established its leadership following a steady growth path in all global markets and pursuing its strategy focused on the development of an innovative win-win and integrated ecosystem based on connectivity and the IoT, which translates the Smart Home concept into reality. Using a one-of-a-kind organisational model, based on the concept of widespread entrepreneurship and empowerment of work teams and individuals to maximize their contribution and to create Micro Enterprises, Haier has combined constant growth through internal lines with successful acquisitions such as GE Appliances, Fisher&Paykel and the Candy Hoover Group».
With its multi-brand strategy that leverages on the different positioning, Haier aims to reach the reach the top three positions on the European market by 2023.