Gorenje announces the production of its millionth cooking appliance this year. It is a very good result because this annual milestone is usually reached at the end of December by the company, that donated the jubilee cooking appliance to Dragica Senić, a worker of the galvanising plant.
Orders and consequently production volumes increased after the takeover of Gorenje and the arrival of the new owner Hisense, so that last year the company manufactured the millionth device much earlier as usual (in November), and this year, despite a severe crisis due to the coronavirus pandemic that oblidged to shut down factories for three weeks, the millionth cooking appliance was produced as early as October 19th. 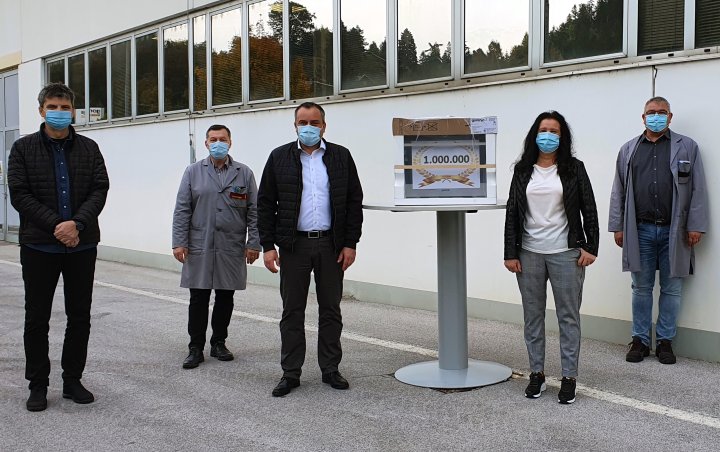 «In the spring, we almost gave up hope because of the coronavirus situation, as orders were reduced overnight to practically zero – says Rok Borovnik from Production Planning at the Cooking appliances factory. – Nevertheless, we picked up quickly, sales secured new orders and based on the good results of increasing productivity and good work of our production workers we immediately made up for the lag and fulfilled our obligations to the Sales department and thus to our customers.»
Gorenje expresses its satisfaction for the numerous orders received in August, for certain types of appliances up to 25% more than last year. From July to August 2020, the company reports that the quantities increased from 110,000 appliances per month to more than 180,000 appliances and from here only increased further. Moreover, in September, a record of 184,324 manufactured cooking appliances was reached.
«We donated the millionth appliance – an oven – to our colleague Dragica Senić from the galvanising plant, and this was also a symbolic gesture to show that the galvanising plant is now a part of the cooking appliances factory, not only formally, but is the heart of cooking appliances production. We are all one team and through teamwork we strive to grow and improve results, – said Jernej Heindl, director of the Cooking Appliances Factory. – We are very proud of the milestone we have reached and we are boldly looking at new, ambitious goals. Congratulations to the entire team of cooking appliances, who with their commitment and dedication in difficult conditions have shown that we can handle even such great challenges.»

APPLiA withdraws its legal challenge before the EU General Court

UK announced a plan for a new home appliances regulation