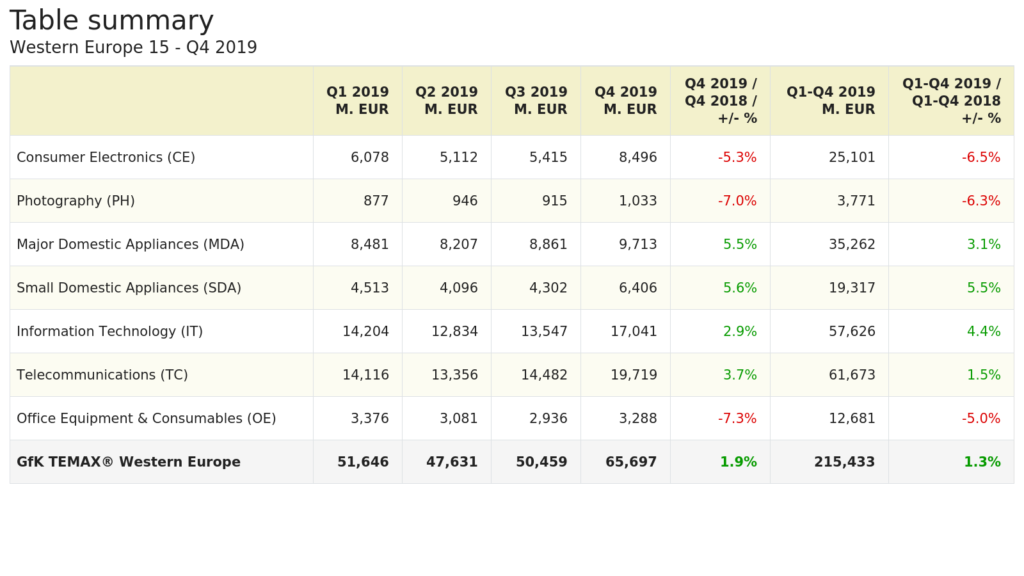 GfK POS data reveals that about 20% of the total annual sales of Technical Consumer Goods (TCG) are now concentrated in a period of eight weeks, between the Black Friday and the post-Christmas. In 2019 this period recorded an increase of 6% compared to the previous year.
All three events, as GfK experts explain, are substantially different in their dynamics. Black Friday’s sales show a heady 114 percent sales value uplift compared to the average week. One should not underestimate Christmas and post-Christmas though, with uplifts of 45 percent and twelve percent respectively. But the growth trend is much stronger post-Christmas, while the Christmas period is actually slightly declining. The relative importance of each event is similar across most key markets with the exception of Poland, where Christmas is still the biggest event in terms of sales values, and China, where Singles day far outweighs any other seasonal promotion event.
«Sales momentum starts earlier than ever – says Norbert Herzog, GfK expert for retail insights. – We see strong sales value growth now in the weeks leading up to Black Friday. In the week prior to the most recent Black Friday, sales grew by 17 percent, accompanied by increased levels of price promotions. The effect that Black Friday has on the whole peak season is to pull sales forward.”
Analysing the different geographical areas, we can see that Brazil saw phenomenal sales value uplift of 291 percent, generating 1.6 billion euro additional revenue during Black Friday week compared to the average. This growth was mirrored to a lesser extent in Germany, Italy, Poland, France and Great Britain. Spain shows the greatest week-on-week growth with Turkey enjoying the highest year on year growth as Black Friday is in a more infant stage in these countries.»
Regarding the e-commerce, GfK analysis underlines that on-line sales are not higher than the average week across all three events, but there is a clear peak on Black Friday, with more than 200 percent more on-line sales than the average week. GfK’s FutureBuy study shows that 88 percent of respondents agree with the statement “Seasonal discounts trigger me to make more on-line purchases.” According to GfK data, moreover, consumers tend to go directly to the retailer’s sites rather than browse via search engines. This offers a huge opportunity for retailers to garner a share of traffic and target their promotional campaigns.
But what are the best-sellers of the examined period? On Black Friday, a large proportion of expenditure is on consumer electronics, with small domestic appliances and IT coming second and third. At Christmas the picture changes slightly as the gifting opportunities offered by small domestic appliances, such as beauty electronics, elevate this category to first place. Photo and telecoms also do well Christmas and post-Christmas.

Deloitte analyses digital media before and after Covid-19