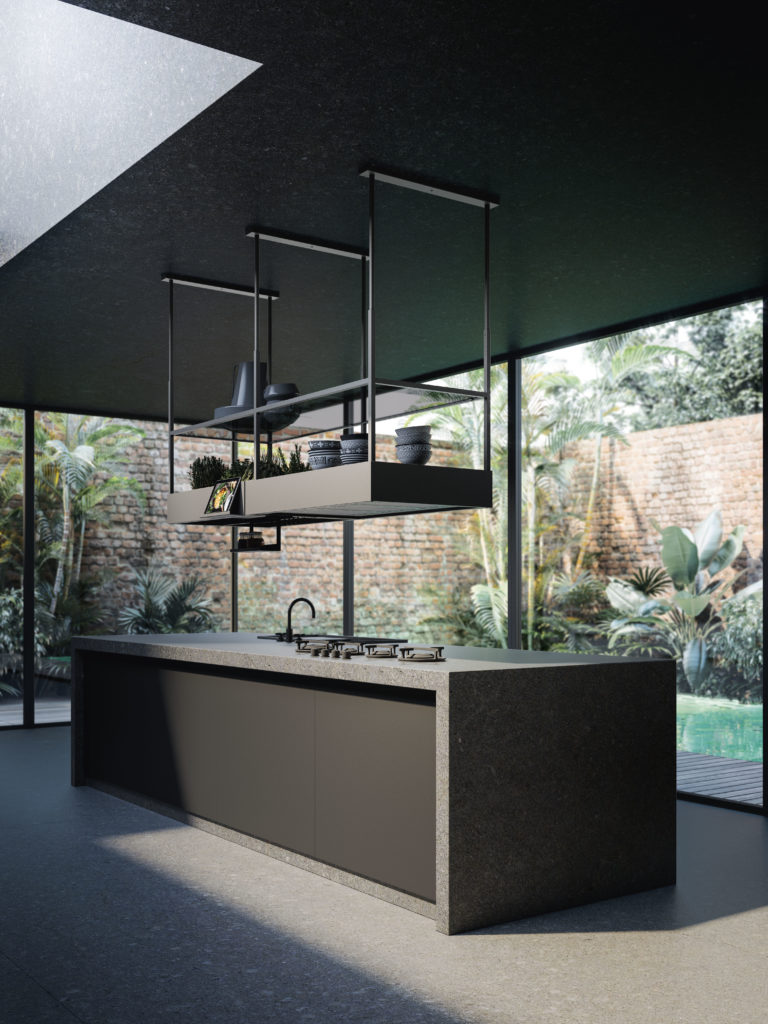 Spazio, the hood launched by Falmec at Eurocucina FTK last year, has received great acclaim from the public, the press and industry operators, confirming itself among the most successful products in the Falmec universe. Further proof of this are the awards received during 2019 and the selection by the ADI as a product on the list for the 26th Compasso d’Oro. Smart in design as well as in the distribution of spaces, the solution designed by Francesco Lucchese allows the user to facilitate activities in the kitchen thanks to a kit of accessories and additional functions. Spazio presents a 180 cm island structure with three load-bearing elements – entirely in stainless steel, also available in black finish. In the lower part, it features an equipped channel divided among hooks for organizing kitchen utensils, a shelf for spices with a roll holder, a LED lighting system that extensively illuminates the work surface, and a system of electrical sockets and USB ports that allow to recharge tablets, smartphones and MP3 players to have them always at hand, as well as having a ‘tablet support’ to quickly consult the apps. Moreover, Spazio is equipped with an area dedicated to the cultivation of aromatic plants directly in the kitchen, to have a real domestic vegetable garden, thanks to a dedicated light kit and a kit consisting of two trays. From a technical point of view, Spazio incorporates the Circle.Tech system, patented by Falmec, that, thanks to the union in a single apparatus of the suction and filtering part which develops horizontally, allows the outgoing air to spread uniformly and be effectively filtered by a series of filters that wrap around the motor. The Carbon.Zeo filtering technology is able to retain odors with double efficacy compared to the classic filtering solutions, combining materials of natural origin, such as active carbon and zeolite, ideal for the absorption of organic compounds and water vapor.

Siemens studioLine varioLift can be controlled remotely and by voice

Gourmet hob by Ernestomeda: a new concept in the kitchen