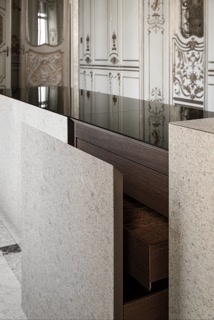 Created by Claudio Silvestrin, Pietra (Stone) is the latest project presented by minotticucine at Marmomac 2019. It is an example of an ideal encounter between materiality and “visual silence”, emphasized thanks to the application of innovative technologies. With this model, the company wanted to express the most hidden part of the material emphasizing its lightness through the beautiful cracks.
This kitchen is characterized by an aluminum perimeter base, as a solid support for the entire kitchen, which is built with shoulder modules allowing infinite configuration possibilities, always modifiable over time. Made of white porphyry with a wooden structure, Pietra consists of four modules of different height and function. The first one, 104 cm high, is the snack area, dedicated to conviviality. The second monolith, 96 cm high, is the washing area: the large basin is composed of a portion with a washing function, a rinse and a glacette part. The third module, height 88 cm, is the work area formed by a fixed and a mobile part: the mobile one is raised and reveals a useful area for the insertion of small appliances. Finally, the fourth monolith, 80 cm high, corresponds to the cooking area and consists of an exclusive modular ceramic glass top. The modules can be composed in space according to specific needs. 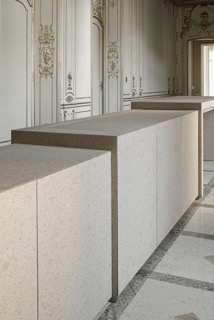 As in the minotticucine tradition, every single aspect of Pietra is cared in the smallest detail: the doors are characterized by a bronze profile that frames thin sheets of stone with a thickness of 5 mm. The work area has a portion of a movable floor: when it rises, it discovers a functional compartment for small electrical appliances, the top of the washing module flows and reveals the large bathtub. “With Pietra, – the comapny explains – minotticucine continues its path characterized by structural and formal coherence, where the material diversity between the elements reinforces the chromatic and visual harmony of the whole. An aesthetic union of strong impact that opens the way to innovative insights, for a design that comes from materials and incorporates the most advanced technological applications.”

A kitchen for the home chef