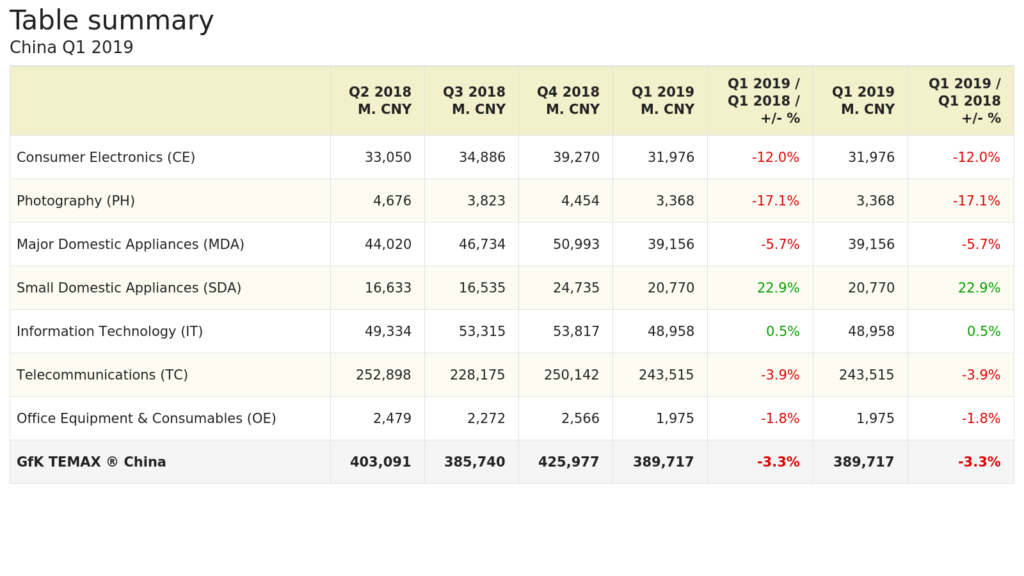 In China small domestic appliances recorded a significant sales value increase in the first quarter 2019. According to GfK Temax, the sector closed the first three months of the year with a turnover increase of 22.9%. In Q1 2019, the offline market of rice cooker is stable while the on-line market of the segment is growing rapidly. In terms of product type, IH rice cooker has become main steam in off-line. Rice cookers in low price tier without additional features is still dominate online market.
A bad performance, instead, was recorded by major domestic appliances and communication products that decreased by 5.7% and 3.9% year-on-year respectively, while the photo market decreased by 17.1% and CE market decreased by 12.0% year-on-year.
Among the main trends of major domestic appliances, GfK underlines that thanks to the demand of low-level market, drum offline market achieved a counter-trend growth in 2019 Q1. Driven by the increasing proportion of mid-to-high-end products with prices above 6,000 CNY, the average price of drum in offline market increased by 4.2% YOY, driving the upgrading of product structure.
However, influenced by the slowdown of macroeconomic growth and inadequate pulling power of the real estate market, there was not any obvious positive factors in the external environment for major domestic appliance industry in the considered period.
Traditional major domestic appliances brands tend to adjust on-line market layout by launching younger Internet sub-brands to cope with the impact of rapidly rising Internet brands (such as MI).
As regards consumer electronics, from a macro point of view, China media tablet market has finished its self-adjustment, and is entering a stage of stable development. Business and education have become new contributors

Retail is moving towards a new phase

Sales of appliances grow in Korea due to coronavirus