Samsung marks its 50th anniversary this year, and the company is continuing its best efforts to fulfill its duty as a global citizen in the areas of the environment, product responsibility, sustainable supply chains and social contribution. Since its Environment Declaration in 1992, Samsung Electronics has been managing its ‘green’ business in order to fulfill its environmental responsibilities understanding that any expense put towards fighting environmental issues is not an optional, but instead a necessary, corporate investment. 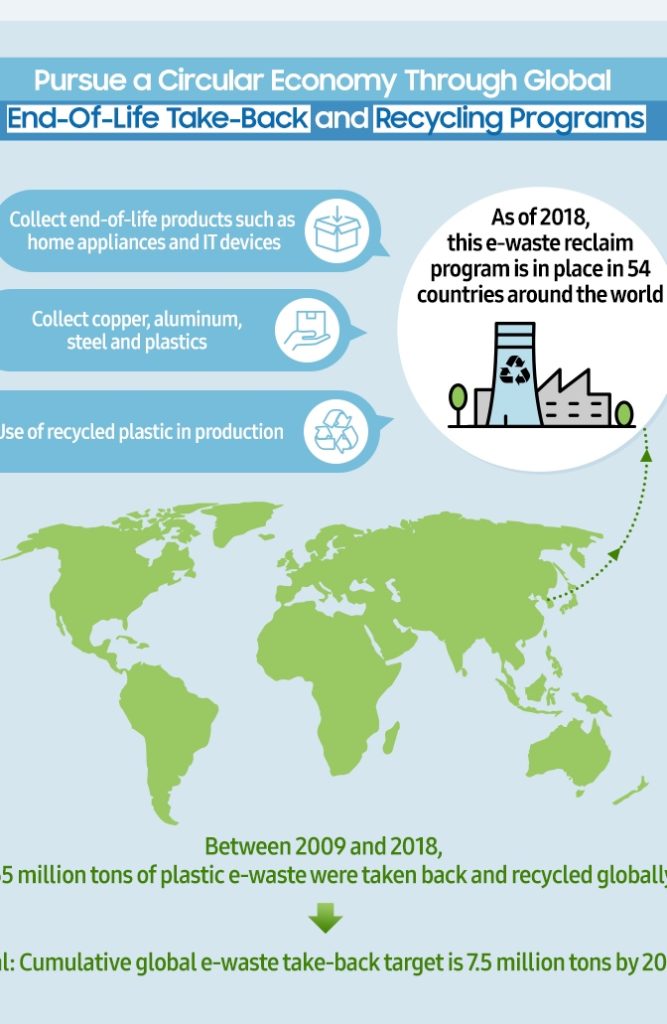 Many are the activities and initiatives that the company has followed and is still practicing at this aim.
In 1998, the company established its own E-Waste Take-Back and Recycling Centers to promote the efficient use of waste products, pioneering this program in the domestic electronics industry. In 2004, the company advanced its development of environmentally friendly products by introducing the Eco-Design Process, an appraisal that assesses the energy efficiency, resource efficiency and environmental damage of a potential product right from the beginning of the product development cycle. In 2005, Samsung’s Environment Analysis Lab was established to put in place a system that keeps track of whether hazardous substances are included or not in a product’s development process, from specific parts and components through to completed products.
As a result of these initiatives, in 2009 Samsung was able to introduce Green Memory, a high-speed, low-power and highly reliable semiconductor solution. If all global servers were to implement the 5G Green Memory Solution as of 2014, 45 TWh of electricity would be saved overall annually, and the environmental effect would be equivalent to planting an additional 800 million 10-year-old trees. Samsung’s Quantum Dot TV, launched in 2016, was the first TV product to not use cadmium, a material found to be harmful to both the human body as well as the environment. Such competitive edges were maintained in the launch of the QLED TV in 2017 and QLED 8K in 2018, making Samsung a market leader in terms of industry innovation as well as sustainability.
Furthermore, Samsung’s Galaxy Upcycling program provides an alternative method for resource circulation by repurposing used smartphones as IoT devices with new functions. Efforts such as this that the company continues to propagate has led to global recognition, with the company winning the United States Environmental Protection Agency’s ‘Champion Award: Cutting Edge’ in 2017 for its game-changing work in electronics sustainability.

Electrolux keeps its focus on Science Based Targets

AppliA Europe announced the targets reached by the European industry