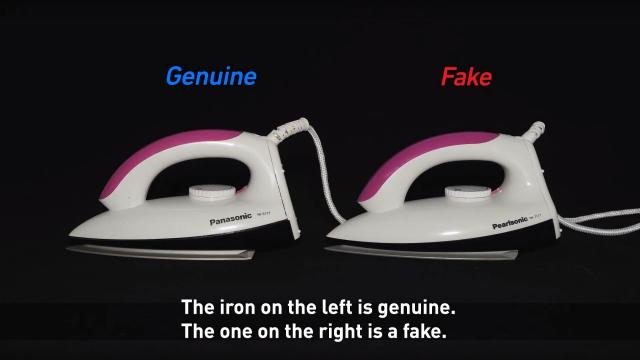 During its 100 years of history and activity, Panasonic has also been fighting a long battle against fake products. “Fake products – the company explains – not only cause quality problems that lead to accidents and injuries among customers; they also result in economic losses to society as a whole, and prevent the building of a healthy society. Panasonic believes it is a corporate duty to eliminate fake products, and is engaged in a variety of measures to achieve this goal in view of SDG’s (Sustainable Development Goals) as well.”
A very shocking sample of what it could happen if a home appliance is not built following all the safety and quality standards is shown in a video, in which a fake iron, apparently identical to a Panasonic one, initially appears to be problem-free, but within a few minutes it begins to burst into flames. Actually, the iron is not manufactured by Panasonic. It’s a fake product. This shocking video shows a fake product that was circulating around overseas markets and was brought back to Japan. It was tested to see what would happen if the thermostat that controls the temperature were to malfunction. This fake product was not equipped with a safety measure in the event that the thermostat malfunctioned. In such a case, the temperature would continuously rise until it burst into flames. On the other hand, with a Panasonic iron, even if the thermostat were to break, the temperature fuse would function and prevent the temperature from rising above a certain level.
As the company underlines, fake products are identical to genuine products in their appearance, packaging, logo, model number, and other aspects. Among them, some actually have the Panasonic brand. Also, recently, people dealing in fake products use a variety of methods to trick customers into believing that fake products are authentic Panasonic products, and they use various means, including advertisements and sales methods that make it difficult to immediately determine that the products are illegal. These fake products do not have an inquiry contact listed in the User’s Manual, so it is clear that they do not intend to take any responsibility for the customer’s safety.
In order to prevent damage to customers and society in general due to fake products, Panasonic works with authorities at various stages of distribution, including production, import/export, wholesale, and sales. From the exposure of fake factories to customs, a variety of measures are employed to eliminate fake products.

Award to Rowenta for its Effiwatts technology