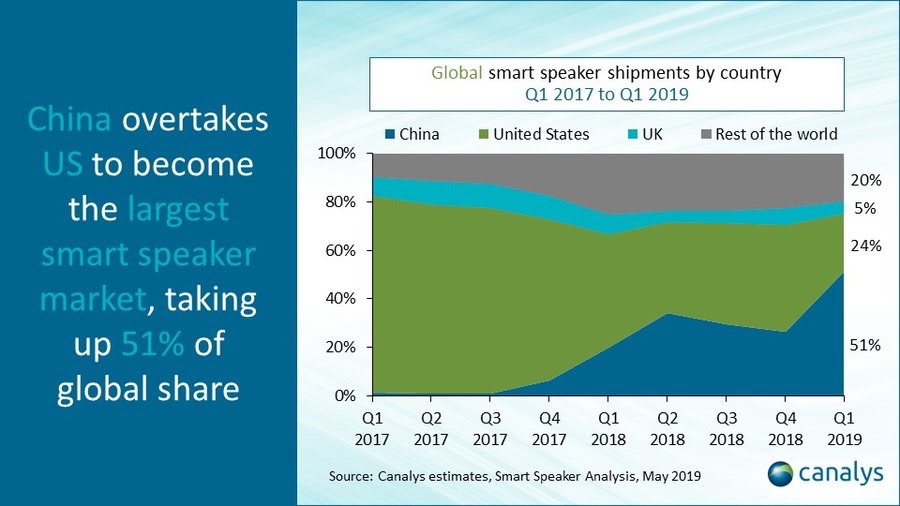 Smart speakers are growing very fast in China, that has reached 10.6 million units, recording an increase by almost 500% year on year in the first quarter 2019, with a sequential growth of 23%, which contrasts the global seasonal trend. This data have been published by Canalys, that also underlines that China has become the largest smart speaker market in the world, surpassing the United States, where 5 million smart speaker units were shipped during the quarter. The world market for smart speakers, again according to the Canalys report, reached 20.7 million units, returning to a three-digit growth of 131%.
China alone absorbs 51% of global shipments of smart speakers, while United States drop to 24% in the first quarter of 2019, from 44% recorded in the fourth quarter of 2018.
The competitive landscape in China has experienced a significant shift. Baidu has excelled in the market for the first time, recording a very strong quarter, also thanks to many activities of promotion and marketing dedicated to its smart speakers.
The global vendors, instead, such as Amazon, Google and others, according to Canalys, are focusing on improving interactions with smart assistants, through different forms of devices, particularly with the help of third-party developers.
It is the opinion of Canalys analysts that multimodal user interaction is the theme of this year. Smart assistants in smart speakers are gaining more functionality through additional components such as displays, cameras and sensors.
However, skills and actions serve to improve the ability of assistants to operate and provide value to users. According to Canalys, the smart assistant ecosystem will be unlocked in its unlimited potential only with the help of the largest community of developers.