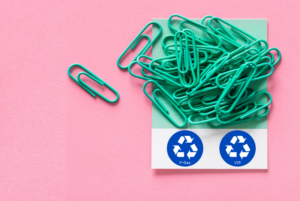 Recycling is one of the most important phase in a circular economy and the home appliance industry has been working hard about this theme. One of the most recent initiatives is that announced by APPLiA at the beginning of the year: as from 1 January 2019, home appliance manufacturers in Europe, represented by APPLiA and beyond, are starting to distinctly mark certain large appliances containing F-Gases and Vacuum Insulation Panels (VIPs).
According to the Association, this by placing the harmonised symbol on the back of refrigerators, heat pump tumble dryers, washing machines, washer dryers and dishwashers, the sorting of products at their end-of-life will become safer, easier and more environmentally sound for recyclers.
«Manufacturers have the knowledge of evolving technologies and are ready to make an extra step and investment to support treatment facilities and recyclers in sorting appliances for environmentally sound and safer treatment – Korrina Hegarty, APPLiA’s Environment Policy Director explained – . The open door to other manufacturers to voluntarily adopt the marking approach has also attracted a larger scope of companies, such as ZUG Kühltechnik, a Swiss company eager to enhance the waste treatment process by marking the refrigeration equipment it produces. The commitment is a continuation of a number of pro-active measures which the industry has introduced in the last couple of months, such as the launch of the I4R platform – the unique one-stop source platform providing information and guidance to recyclers and preparation for reuse operators on how to handle WEEE.»
Another relevant sample of the industry commitment is expressed by the Code of Conduct for Vacuum Insulation Panels, following the Association’s study on the recycling of cooling and freezing appliances containing the new technology. The study, that was carried out in 2013-2014, assesses how vacuum insulation panels influence recycling processes. The use of these panels has gradually increased since 2010 due to their better insulation performance compared with PU-foam. VIPs can be found in new Cooling and Freezing (C&F) appliances of energy class A++ and A+++. Currently low quantities of these types of C&F appliances are arriving at recycling plants but the production is increasing and it is expected that this amount will increase in the coming years.

KitchenAid is at Ambiente Frankfurt

LG Electronics launched its Styler in the UK market