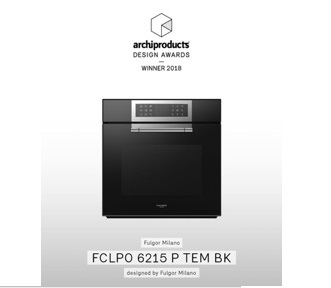 The new Cluster Concept line, presented this year at Eurocucina by Fulgor Milano, received the Archiproducts Design Award 2018 for its FCLPO 6215 P TEM BK multifunction oven in the Kitchen category. The competition involved 600 products from over 400 international brands from 15 countries. The jury, composed of 40 experts of international standing from the industrial, design, media and the Archiproducts staff examined the candidate products in 14 categories.
The new Fulgor Milano Cluster line offers a very advanced technology with a sophisticated aesthetic, typical of the Italin style. All the cooking appliances of this line are integrated with the innovative CREATIVE Extended (TEM) technology, through which the selection phase of the functions is optimized. In fact, the user finds on the left of the panel the functions that he accesses intuitively and on the right the manual programming menu. In particular, the FCLPO 6215 P TEM BK oven is characterized by the Classic Pizza function, with which the temperature can be raised up to 350 ° C, that of a professional wood-burning oven, to cook 2 pizzas in 2 ‘and 35 ” at the same time. Safety is guaranteed by the construction of the four-glazed door that remains below the hot temperature, despite the high internal temperatures, even during the pyrolysis cleaning cycle.
The oven is completed by a software with predefined recipes, which can be modified and saved by the user, as well as by a tray in thermal glass (baking dish) and the probe for measuring the temperature in food: all standard.
«We are very proud – Gianni Meneghetti, general manager of Fulgor Milano commented – to have won the Archiproducts Design Award for the second year in a row.