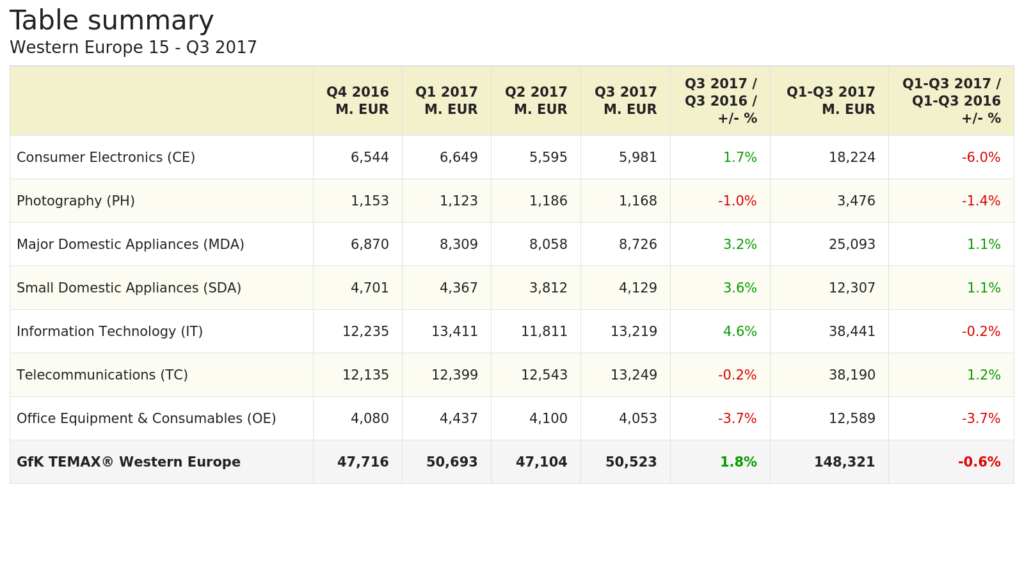 Technological Consumer Goods in Western Europe exceeded 148 billion euro in the first nine months of 2017. According to GfK Temax, the third quarter shows a particularly positive trend with a value increase by 1.8%.
However, the singular sectors show very uneven trends. Essentially, home appliances, both large and small, and telecommunications have driven growth.
White Goods recorded a revenues growth of 3.2% from July to September, and of 1.1% in the first three quarters of 2017, a period in which the sector totaled approximately 25.1 billion euro. The most dynamic market was Denmark, which saw a 10.6% growth in the third quarter, while Sweden, Finland and Italy declined.
Overall, it is visible a better trend for built-in segments than free standing ones, thanks in particular to the high demand for induction hobs with a flexible cooking area.
Dryers with heat pump and washing machines with a high load capacity remain among bestsellers too, while washing machines with reduced dimensions lose appeal.
Turning to small appliances, GfK underlined the contraction of some markets such as Sweden, Finland and the United Kingdom, while in France there was a favorable trend.
The leading products are the rechargeable vacuum cleaners and the automatic coffee machines. Even the hairdryers show a positive trend in the third quarter.
Overall, small domestic appliances closed the first nine months of 2017 with an increase in value of 1.1%, reaching a turnover of about 12.3 billion euro.
Brown Goods, finally, recorded an increase of 1.7% in the third quarter, but a 6% decline in total turnover in the first nine months of last year.
Austria, Italy and Sweden ended the third quarter with a fall, while Germany posted double-digit growth.
The sector remains divided between high-end segments, such as new-generation televisions, which raise the value of the market and attract high-spending consumers, and goods now reduced to a niche, such as DVD players.
Overall, the consumer electronics business reached a value of 18.2 billion euros from January to September 2017.