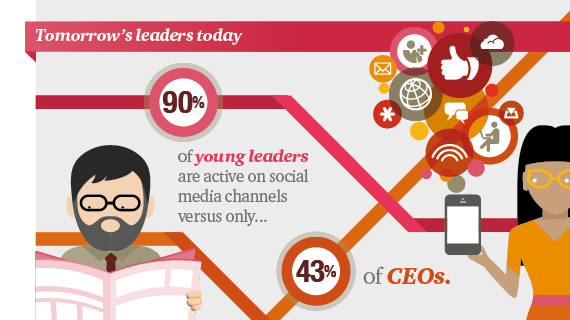 PwC published the 20th CEO Survey reporting the opinions of over 1,300 CEOs about the impact of globalization and technological change on the business world, and what the future may hold.
For the second year running, the company also ran a parallel survey with over 200 leaders from Aiesec, a leading international student organization, involving respondents under the age of 30 from over 100 countries. From the obtained answers, it is possible to compare the vision of the current managers with that of the future ones. The first information deriving from the survey is the optimism of the young generation: 60% of Aiesec young leaders believed economic growth would improve over the following 12 months, compared with only 27% of CEOs.
This is only one of the differences emerging from the generational comparison. Another important conflict regards the role of technology, with 49% of Aiesec young leaders believing that technology, as a major disruptor, will completely reshape competition across industries, compared to only 27% of CEOs interviewed. In addition, almost a third of Aiesec members believe that automation and other technologies will – to some extent (60%) or a large extent (30%) – cause job losses in their country over the next five years. But this is not only an opinion. Young respondents are also very active in using technology and digital tools, as shown by the 90% of young leaders that are active on social media channels, compared to 43% of current CEOs.
This may explain why young leaders are more attuned to the potential risks social media pose to stakeholder trust levels. As emerges by PwC survey, they also consume a lot more digital than print media, but surprisingly less than half make most of their purchases on-line and only 20% are active gamers. With technology comes the inevitable debate about trust. Both Aiesec young leaders and CEOs agree that the basis of trust is a strong corporate purpose that’s reflected in values, culture and behavior (92% and 93% respectively). But they differ in their view on the practical challenges that stem from it: 70% of young leaders believe breaches of data privacy and ethics will impact negatively on stakeholder trust levels in the coming five years, compared to only 55% of CEOs. Half of the Aiesec respondents believe risks from the use of social media will do the same versus only 38% of CEOs.

PwC explains how to target the highest-value consumers

Winn Everhart will be the new Senior VP of Whirlpool U.S. operations