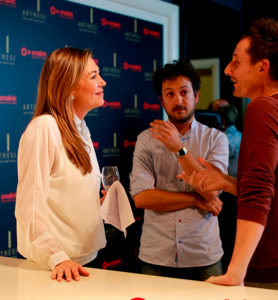 Tessa Gelisio, television host and journalist, writer and environmentalist, was the guest of honor of the cooking show organized by Arthesi in collaboration with Smalvic, Italian kitchen appliances producer. The event was held in the showroom of the kitchen manufacturer in Vicenza, where some of its top-of-the-line appliances are displayed. Tessa has chosen these two production companies from Vicenza to furnish the home kitchen where her famous daily recipes are made and filmed. In Vicenza, with the many guests that attended the event, she told of her commitment for the planet and her ‘practical’ satisfaction in using the products of the two companies every day (the Vega kitchen by Arthesi and the electric multifunction oven Linear 60 by Smalvic); then, she personally introduced the cooking show run by the chef Alberto Rigoni from Asiago, province of Vicenza. During the evening, a special moment was dedicated to N|EX|T|, the innovative fiberglass gas hob, designed for Smalvic by brogliatotraverso design studio, awarded with important international design awards.

All the choices of the Gaggenau 200 series