A new reinterpretation for some Foscarini’s products has been proposed to create new environment in the home. Recently, the Italian company of lamps and lighting design, has launched the L and XL versions of Twiggy, Big Bang and Spokes. Twiggy, a model designed by Marc Sadler, becomes “oversized” in the Twice as Twiggy version: a lamp with important dimensions, dedicated to the great outdoors, but maintaining the slight sign and the flexibility of the original design. A counterweight system allows to choose the height of the lampshade. Twice as Twiggy is also available in suspension with the same large lampshade. 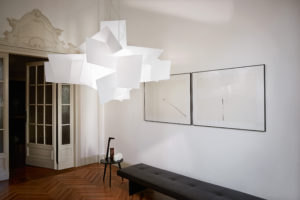 Big Bang is another model recently get bigger: this lamp, designed by Enrico Franzolini and Vicente Garcia Jimenez, is now proposed also in L and XL versions, for which the Foscarini lighting research has recalibrated the light intensity on the major dimensions of the lamp, using a Led source that diffuses a soft light even in large spaces. The third new proposals by Foscarini is the new edition of

Spokes XL. Characterized by soft and solid form at the same time and the light volume, which contains the Led light source, it is a creation of Vicente Garcia Jimenez  and Grazia Cumini.

After Barcellona, Boffi and De padova arrive to Madrid

The Sophie hood by Falmec available also as lamp