Exports of small domestic appliances are growing driven by design, quality and charm of the Italian way of life. Germany and France are the main buyers. But also in Usa and Asia, small appliances conquer market shares 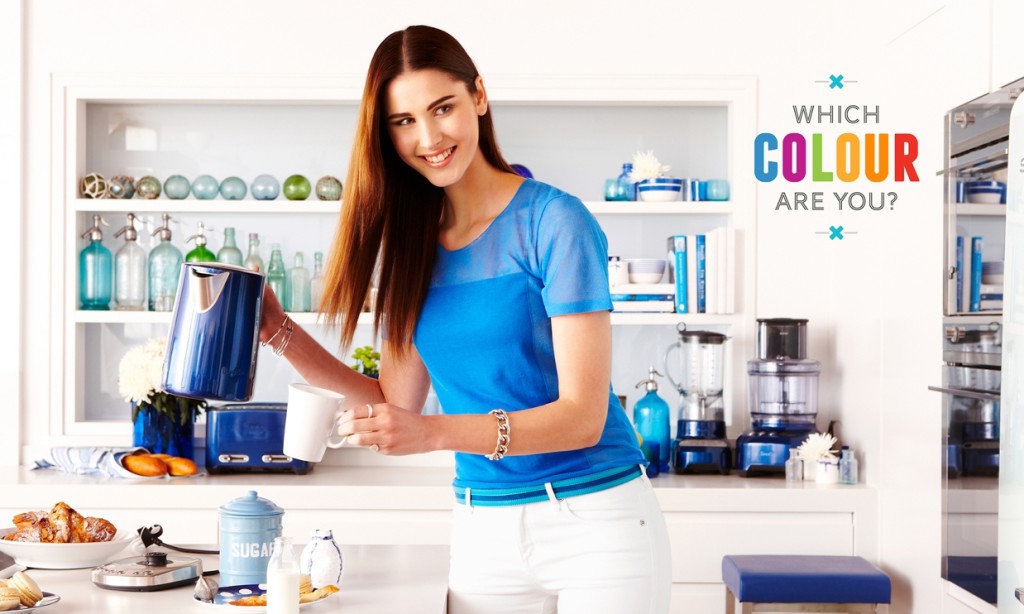 Recently, the European Commission said it is convinced that the Italian economy will return to grow again during 2015 (+0.6%) and 2016 (+ 1.4%),  mainly thanks to export, that will compensate a low domestic demand. Already in 2014, according to Istat, national exports increased by 2%, with a highest increase for the north-eastern regions (+3.5% ) and central ones (+3%).
To support the competitiveness of Italian products in the world is, above all, their quality: a survey of the Confindustria Research Centre revealed that, since 2000 until today, the quality of Italian exported goods – measured as the ratio between the average unit values ​​and the production prices – has grown much more than the other major European countries; the Italian index rose by 1.6% average per year (25% cumulative) compared to +0.9% of Germany, +0.5% of France and  +0.4% of Span. «Made in Italy products have always aroused interest abroad, thanks to their high quality» confirms Francesca Polti, managing director of Polti, company that has been operating with foreign countries since 1978, year of its founding, and that is now present in over 50 countries, with a 60% revenue deriving from export. «It is fundamental to maintain and consolidate this quality level to convince foreign interlocutors that Italian products can make a difference.»

Export of small appliances
In this general picture, even small domestic appliances play their role. According to Confindustria Ceced Italia, the export of small appliances rose, between 2013 and 2014, for a value of 308 million euro in Germany (+19.8%), 180 million in France (+3.8%), 91 million in the Netherlands (+36.1%) and 78 million in Spain (+18.5%).
Even the US represent an important destination, grew by 3.6% last year, for a total of 62 million euro. «The United States are among our key markets – Francesca Polti says about this – so we decided to invest in this market by opening a branch in 2012. Here we have a strong business partnership with one of the most important TV channels of home shopping.»
The exports of small appliances to Russia, instead, are declining (-19%), due to the strong slowdown in the economy of this country, now characterized by a GDP drop of -4.8% and by the depreciation of the ruble. In Ukraine, the decline was of 24.8%, because of policies tensions in this area. What drives the purchase of small appliances with Italian brand abroad? We forwarded the question to Carla Castiglioni, export manager of Trabo brand, who replies: «Italian products have an unmistakable design, very appreciated, especially in some countries, as the United States and the United Arab Emirates. Specifically, Trabo started to appear on the international markets just with a design product: its toaster, designed by Gae Aulenti in 1997, which is the thinnest of its kind, with only 7 cm in depth, and that has become the icon of our brand in the world. It must be said that the small domestic appliances sector is facing big changes: Italian production is declining and many companies and multinationals businesses have moved it to China or neighboring countries; or they buy already existing products. This is not the case of Trabo, which invests in molds, ideas and projects, also with young designers.»

To her words Enrico Vento adds his own, president and CEO of Bompani Elettrodomestici, company for which export accounts for 95% of the production and 80% of the turnover, «There are markets in the world that give a strong value to the made ​​in Italy, especially when we speak about major domestic appliances and cooking. In these markets, Bompani boasts a very strong presence with its products realized ​​in Italy and characterized by attention to design, quality manufacturing and tradition. For small domestic appliances, it is a different matter: Italy has not a strong production of Sda (small domestic appliances), which is now concentrated mainly in China or in low-cost countries; the export of Italian Sda is therefore essentially linked to the brand strength. Bompani has built its own imported range of small appliances, which has very precise characteristics: it is dedicated to food preparation, has a very high quality level, combines functionality and aesthetics and has, as its distinctive elements, color and design. These products complete the offer of the brand that, thanks to its strong distributors, boasts a very significant presence abroad, mainly in Europe, in all the Middle East area, in the Far East and Australia.»

To have success in foreign markets, small appliances sometimes undergo some changes, which make them more compliant to the demands of consumers in different countries. It also happens that some products that succeed well in Italy are not exported, because they are not considered interesting enough for abroad interlocutors. «We try to adapt our products to the needs of the customers we address to in the respective markets» declares about this matter Edoardo Pontoni,   trade marketing manager of Elica, company that since the times of its establishment has been given  ​​great importance to the foreign markets, to the point that its first customer was not Italian but foreigner. Today for Elica the export share accounts for 90% of sales, and has as referent markets: Germany, France, China, India, Russia and Latin America. «Our vocation for export has received a strong push since 2008 – Pontoni explains – through the acquisition of Gutmann company, in Germany;  in 2010 we acquired and formed respectively the company Putian in China and Elica PB in India; in 2011 we opened the Russian sales subsidiary and, finally, in 2014, it was the time of the last born, the French sales subsidiary.»
Export represents an important role also in the commercial strategy of the company Olimpia Splendid from Brescia, which opened branches in Shanghai, Madrid and Paris. «Abroad, in particular in extra-European countries, made in Italy has always had a special appeal – confirms Marco Saccone, marketing director & subsidiaries manager of Olimpia Splendid -. The appeal deriving from functionality, aesthetics and performance of our products, realized ​​in Italy, allows us to compete at international level, with very strong brands in the air conditioning sector.

To date, we pay a particular attention to the growth opportunities in geographical areas for us “new”, such as South America, Australia and South Africa.» Another company to mention when talking of strong abroad made ​​in Italy is Smeg that, today, in addition to its range of major domestic  appliances, has started to propose internationally also the small ones. «Especially starting from the last decade, we have implemented a strategy of consolidation of our presence in the world, which sees us directly present in different markets with new commercial companies, showrooms and monobrand stores – they say from the headquarters at Guastalla, Reggio Emilia -. Recently, we have enriched our offer with the launch of small appliances, whose data of ordered and sold resulted immediately very positive, and also in the first quarter of 2015. These products have received the Good Design Award, the iF Design award and the Red Dot award. In particular, the electric kettle is the device which recorded the largest volumes of sale while, as regards the color, cream resulted to be the preferred one». 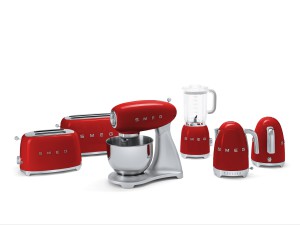 Reducing the brakes to competitiveness
So far the lights. But the Italian competitiveness is burdened by some shadows, not only with regard to small appliances, but for all the products that go abroad, according to the aforementioned data of the Research Center of Confindustria. From 2000 to 2014, the cost of labor per unit of product in Italy rose by 3%, compared to +1.2% of Spain, +0.2 of France and -0.1% of Germany. Despite this increase, the Italian manufacturers have maintained competitive prices, at the expense of profit margins. The margins erosion, however, is not sustainable for a long period and therefore it represents a weakness factor of the Italian manufacturing, because penalizes the investment capacity. For the Research Centre, the loss of competitiveness due to the labor cost caused, since 2000, a slowdown of the export growth of 0.95 annual average percentage points; while a lack of increase in exports of 0.06 average annual points is due to the contraction in investment. But there are also other difficulties, «We see – Francesca Polti explains – the lack of a real country-system to support the internationalization strategies of the Italian companies abroad, to which the high investment costs for scouting and start-ups launching are added.» The marketing director of Olimpia Splendid adds: «An Italian company that intends to penetrate foreign markets must surely respond to logistical and organizational difficulties. Moreover, it is important to overcome cultural barriers effectively communicating the brand so that it becomes familiar to foreign consumers.»

The challenge of the future
If it is true that difficulties to be solved remain, according to the Research Centre of Confindustria there are also some exogenous and endogenous factors which play in favor of exports from Italy: the euro depreciation (-8.8% the nominal effective exchange rate from the first days of May 2014 to the last days of January 2015) promotes price competitiveness of Italian businesses compared to those in extra-euro area and allows to stop the trend of margins declining; the barrel collapse cuts the energy bill for businesses, reducing the competitive gap with competitors in less dependent on oil countries and extending, also in this case, the space for a recovery of margins; Finally, the decline of the interest rates in the long term reduces financing costs for businesses. To these elements, other endogenous ones are added, such as the reform of the labor market and of the public administration. «The way is the right one – the survey of Confindustria Research Centre states -. It is necessary to go on with determination to untie the structural knots and thus increase the leverage of the great competitive advantages of the Italian companies.» In this context, export is the big challenge of the future. «We must continue to invest in the made in Italy that wins abroad, increasing the Italian presence in high growth markets such as Asia – Marco Saccone comments -. The assiduous search for solutions that meet the needs of foreign consumers can give a big push to investment in research and development, both in technological and in design field, traditionally sectors of all Italian excellence.»