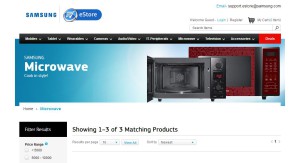 As communicated by Euromonitor International (market research company), the Indian government recently eased the restriction for foreign e-commerce in India and this is an advantage for appliance manufacturers, in order to have new sale opportunities. Euromonitor International explains that manufacturers such as Samsung and LG have already opened e-stores in India. In this country, internet users increased from 51 million in 2008 to 176 million users in 2013 (+248%). Besides, Euromonitor International shows that, following the easing of restrictions for foreign e-commerce, Panasonic recently announced that it would set up an e-store for consumer appliances, mainly to showcase the products on the website. During the period 2013-2018 a 14% CAGR (compound annual growth rate) is expected for appliances’ internet retailing in India. However, a challenge for the future are the infrastructures: Euromonitor  International explains that, due to the wide size of major appliances such as refrigerators, freezers and washing machines, manufacturers can only sell online to consumers in cities where infrastructures and transportation are adequate. Currently, LG’s e-store is available to 27 major cities, including Delhi, Bangalore, Mumbai and Pune, while hundreds of cities remain inaccessible.