Kitchen has changed radically its meaning and its characteristics. During the last years, it has assumed an important new role in the whole house and in people lifestyle. 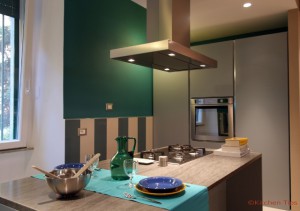 During the last ten years, kitchen has been the room in the house where the biggest evolutions have occurred. Its meaning has changed deep inside, because the lifestyle has changed too.
People have a new consideration for the kitchen environment that has a special meaning both for families and for single men and women.
This is because they spend much more time in the kitchen than they did during the past and have transformed this place on the basis of their own needs.
The old servant’s room has become a creative place to share with others. To follow this new trend, the kitchen has changed a lot. Its location within the home reflects the owners. Many want it as a separate place. Others want to have a beautiful kitchen at the center of the living room.
And this choice, of course, influences which of furniture and home appliances. Those who can afford it, buy expensive equipment, elegantly designed, to put on display in the center of the house. Those who cannot, sometimes prefer to hide the appliances with built-in solutions. The choice varies, however, greatly according to the use that people make of them. Who loves cooking, chooses hobs and ovens with the most advanced functions, to use even in the presence or with the help of the guests.
Today cooking art has been rediscovered, and many people love to practice it in the company of friends and relatives.
In this case, the kitchen takes on a very important social role of sharing and conviviality.
The economic crisis has made rediscover the cheapest meals prepared at home, less expensive than going to the restaurant. A trend that is also approved by the new generations that, for ethical choice, want to reduce waste and rediscover the handmade things.
To have fun cooking together, so, kitchen must be well equipped, so that everyone can do their part in preparing something to eat. For this purpose, home appliances producers has been able to create very efficient and multifunction solutions with all the necessary appliances to prepare any kind of food.

Great integrated solutions
The creation of a new kitchen environment was the result of the combination of different highly qualified skills. From the Sixties, in fact, engineers, designers, architects and interior designers have been working in partnership to create solutions for a new concept.
A partnership that led to the birth of masterpieces, as evidenced by today’s sophisticated and more and more innovative devices, such as those signed by Gaggenau. This famous German brand has ancient origins. In the Sixties it specialized in the production of built-in appliances, characterized by a very special enamel, which the company is still keeping the secret recipe.
Gaggenau, which is controlled by Bsh Group since 1995, has often anticipated the times launching very important products such as the first models of wall built-in ovens, the hobs that combine ultra-versatile plates, fryers and grills; and refrigerators with efficient systems for crushing ice integrated in the door.

A very versatile way of cooking and eating
The introduction on the market of the induction hobs has given a new impetus to the built-in cooking, with a new space management and a very appealing aestetics.
A very prestigious brand in this sector is De Dietrich, which has introduced new concept solutions, such as modular plans that allow you to choose between several different options and combinations of cooking.
The return to the culinary passion during the last decade has increased the consumers interest and attention on all kind of cooking tools and on the devices for imitating at home the greatest chefs, today more and more present and also followed on television.
A trend that has revived even cooking classes, which are frequently organized by the same producers of household appliances or accessories for food preparation.
These are very special occasions to see and learn what an appliance can do, so that people can use it better at home. Often, in fact, people only use the simplest and basic function of the devices.
This renewed spread of the culture of good food has also generated greater care about the organization of space in the kitchen, which is also reflected in the choice of equipment and on their position in the room. Home appliances have changed their traditional collocation and nowadays there are many different options to install them everywhere in the kitchen.

Precious details for the right style
Performance in cooking is obviously the most important thing in the devices choice. But their style is relevant too. Appliances design, in fact, must be harmoniously integrated with the rest of the kitchen furniture. Any market and any country has its own idea of kitchen look and all the household appliances are chosen on the basis of it.
Western markets generally loves increasingly sophisticated and modern design, while a mix of emerging countries are still tied to the essential and traditional aesthetics. So the modern appliances must combine efficiency, colors and shapes and any detail and component must be the right one.
On the one hand, in fact, we witness a search for old fashion products, that recall the classic colors of bronze and brass that were used once. On the other hand, on the contrary, we see the demand for ever more modern, sophisticated, ergonomic and functional products. The appearance of each appliance still significantly affects the choices of the users that, despite the information available from the web, are not able to perceive exactly the intrinsic qualities of an appliance, such as its durability, ease of use or its real efficiency. The aesthetics is so often one of the main selection criteria in buying a home device. It is becoming increasingly important and has consistently translate the contents of the product itself.