They were created for being home tools and became more and more sophisticated design objects to be shown in the living room and in the most important museums.

The kitchen was ones the place of effort, where they stored everything that must not be shown to the guests. It is natural, therefore, that the appliances had their origin in this area of the house.
The first electric heaters and motors were applied to small appliances to heat water or mix food. Then, the first cooktops took a special place in the kitchen, together with the first ovens. These new devices made the environment clean and healthy, reducing the fumes of burning wood and smoke arising from it. But it was only the first step towards a new way of experiencing the kitchen and the conviviality.
A cleaner room and the ability to cook in a different way made the house more presentable and welcoming, although it remained for many years the main space to store all the household tools and appliances. Even today, sometimes it happens to see the washing machine in the kitchen, which was once absolutely common.
The sophistication of the appliances went hand in hand with that of the furniture, which turned the kitchen into a new environment, no more to hide, but to display with pride, because it had become comfortable and well furnished.
The extravagance of the colors and shapes of appliances and furniture of the Sixties and Seventies found its place mainly in the kitchen.
The most beautiful appliances, with special shapes and design, were often exhibited in museums all over the world.
A trend that involved fridges too.
Fridge is often considered the king of the kitchen and consumers choose it with a particular care. They pay great attention to the dimension, the functions and to the style of the model to buy, because the refrigerator has a big impact on the kitchen look and, of course, on the family diet and health.

The health special friends
Nobody think enough about how much health and care of people are improved by most of the home appliances. The advent of the hood, for example, helped to solve most of the kitchen air problems by offering more advanced solutions. The production of this precious device, which requires specific expertise and many years of experience, has grown exponentially from 1970 to 2000.
And what about vacuum cleaner? It is one of the most valuable tools for house cleaning and domestic hygiene. A technological gem that cleans the room, reducing dust mites and making the environment more pleasant to live. But, more importantly, relieving various respiratory problems.
The new generation of home comfort appliances have an essential role in modern life too.
They not only control the room temperature, but also its humidity and the air quality.
With these kind of devices, the producers began to make products specifically useful to the well-being of people, thanks to a treatment that took into account air temperature and humidity. Consumers began to feel entitled to enjoy all the benefits guaranteed by the modern appliances. 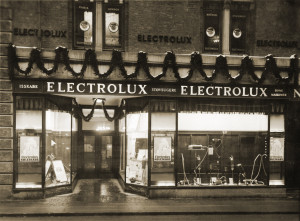 The great companies of a successful industry
These are the principal steps of household appliances history. But this history is made by companies too and, of course, by men. Great entrepreneurs created a new industry with their firms, ideas and projects.
And several of them joined and gave life to the most famous household appliances Groups.
Whirlpool was born in 1911 in Michigan. In origin its name was Upton Machine Company, because of its founders Louis and Emory Upton, who, together with Lowell Bassford started a production of washing machine electric motor and became suppliers of a very important costumer, Edison,which commissioned Upton a large amount of machines. Giving evidence of great responsibility and fairness, the company showed also a new approach to employees, who were granted a paid holiday, an unusual recognition for the working class of the time.
During its long history, Upton Machine Company saw several acquisitions and corporate transformations, enriching portfolio of brands, among which Whirlpool, that in 1950 was chosen as the official name of the Group.
Another fascinating story is which of Electrolux, that begins with the fusion of three companies, Elektromekaniska, Elektron and Lux. It was Axel Wenner-Gren, a brilliant and farward-looking businessman , to lay the foundation, in the early decades of the Twentieth century, for the emergence and success of Rex- Electrolux, which now also owns the brand Aeg and many others.
In 1984 Electrolux took over one of the most famous Italian company, Zanussi. This was born in 1916 in Pordenone, with the name of Officina Fumisteria Antonio Zanussi and was originally a small family business, which reached international dimensions in 1946, thanks
the enterprising son of Antonio, Lino Zanussi. After specializing in the segment of Cooking, it came later in other markets, providing a substantial contribution to the design industry of the sector, thanks to the frequent collaborations with important architects such as Gino Valle.
In a similar way Candy had its origin.
It was born in 1945, as Officine Meccaniche Eden Fumagalli and became soon the queen of the Laundry, Candy Elettrodomestici. Like Zanussi, it was originally a small family company too, founded by Eden Fumagalli, who embraced the brilliant idea
of his son Enzo who, after a journey to the United States, came back Italy thinking about the development of a modern washing machine. With the help of his two brothers, Niso and Peppino,
he gave the company a new organization. And the washing machine Model 50 saw the light.
Since then, the company contributed greatly to the progress technology in the washing. In 1954 it launched Bi-Matic, the first semi-automatic washing machines, which after six years became fully automatic, bringing abroad the fame of Fumagalli family.

The first half of the Twentieth Century saw the birth of another famous name of the household appliances industry, which of Merloni, today Indesit Company (after the acquisition of the homonymous brand in 1987). With its activities it gave a significant impetus to the development of the industrial district of Fabriano.
Here, in the heart of Italy, in 1930 Aristide Merloni had founded Industrie Merloni. In 1958
Ariston brand was launched, which in later years became one of the most well-known in the field of household appliances. In 1970, Aristide Merloni created three company divisions to be entrusted
to each of his sons, Francesco, Antonio and Vittorio, These divisions became, in the following years, three separate companies: Merloni Termosanitari, Antonio Merloni and Merloni Elettrodomestici.
In the same Merloni district, Abramo Galassi founded Faber Plast in 1955. It became one of the most famous and important extractor hoods manufacturer in the world. Faber worked around the concept of comfort of the air, which went far beyond the aspiration of cooking fumes. Over the years, the company has designed technology able to purify the atmosphere and rid odors, making the products design more and more sophisticated.